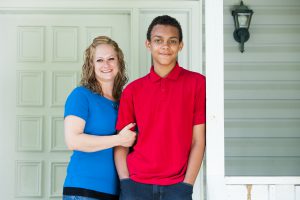 Kids get sick, so when Lindsey White’s son Jayland had a sinus infection, she took him to the doctor, got some antibiotics and thought everything was under control. But his headaches persisted, and so finally the family made a trip to the emergency room. A CAT scan threw them for a loop.

“It showed that there was a large mass almost covering his entire frontal lobe,” recalls Lindsey, a Clinical Appeals Analyst with Parallon Business Performance Group. “The infection had moved through his sinus cavities and found its way into his brain. He underwent a full craniotomy to remove the infection, as well as nasal surgery to remove his frontal sinuses.”

Needless to say, she was out of work for several weeks to deal with Jayland’s post-op care. He has had as many as three doctor’s appointments per week, and the piece of his skull surgeons removed is still being treated for infection. It will eventually be replaced; for now, he has titanium mesh in place. All this has meant a hit to family finances, but the HCA Hope Fund provided some desperately needed help.

“I was out for several weeks following his surgery,” Lindsey says. “My sister, who also works for HCA, advised me about the fund and encouraged me to apply. It was extremely fast, and that alone says a lot. It’s wonderful that HCA has this kind of program; it shows that the company really cares about its employees and will do anything possible to help them. I’ve never worked for a company that offers something like this, and it truly is wonderful.”

As for Jayland, he’s still resting up and getting ready for surgery to restore his missing piece of skull once it, his brain and his sinuses are deemed to be infection free. He’s also enjoying being home-schooled for the moment, his mother says.  “He’s doing really well, and having some fun,” Lindsey reports. “But I think he’s ready for it all to be over with as well.”