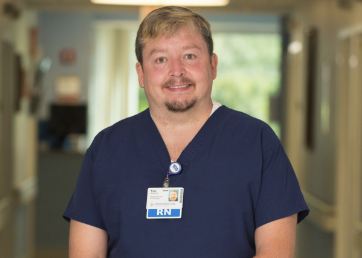 When Tom Quinn went to work for LewisGale Medical Center, he was excited about all aspects of his new job. As a nurse, Tom really enjoys being able to help people, and he also likes being part of a workplace family.

But within a few months of coming to LewisGale, the 44-year-old went from nurse to patient ,and quickly realized just how much of a family this HCA facility really is.

“I had only been at the hospital a short while when I was diagnosed with Chronic Myelogenous Leukemia, which caused my joints to ache and my skin to have abnormal bruising,” Tom says. “I was having difficultly just walking, and as the sole provider for my 10-year-old daughter I was very worried about how I would pay all the new bills that were coming in.”

He reached out to the HCA Hope Fund, and soon received assistance that allowed him to cover medications, co-pays and other illness-related bills.

“All of that was very expensive, and even though I was able to access general medical leave and qualify for short-term disability, I had a lot of financial stress,” he says. “That’s not good when you’re really sick. When the Hope Fund was suggested to me I had to research a little, because I was still fairly new to HCA and didn’t know much about it. The assistance really helped me out while I was dealing with bone marrow biopsies and a lot of doctor visits.”

Tom now is in a medically induced remission, and back at work. He is grateful to his medical team for all the help in his recovery, but also to his larger HCA family for Hope Fund donations that help even the newest employees in their times of need.

“I’m moving around better, exercising and doing generally well,” he says. “I’m able to work and carry a normal patient load, which makes me really happy. Without the Hope Fund I could not have paid my bills and kept my job. I will be forever grateful. I have increased what I give to the Hope Fund, because I want to pass it on to someone else.”