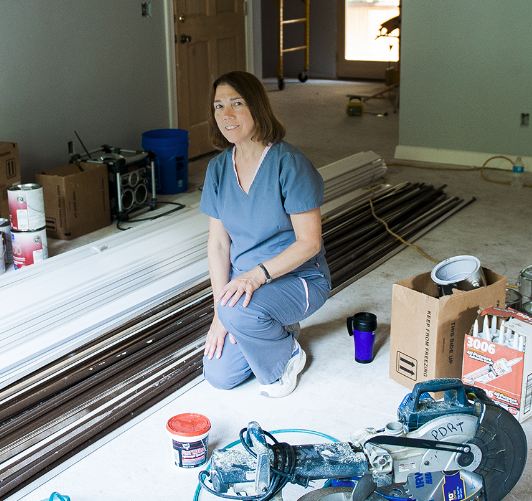 Adopting an “it could have been worse” mindset helped Denise Tansey get through the immediate aftermath of a home fire. In the weeks and months of repair and reconstruction that followed, however, the support of friends, family and the Hope Fund helped her a great deal as well.

The fire was most likely caused by someone bumping against a stove burner as they left the home, and as it heated up it caught nearby mail, recipe books and other papers to ignite and spread. Major damage to her kitchen and dining room meant a teardown to the studs, and a build-out of six months, says Denise, a Nuclear Medical Technologist at Capital Regional Medical Center.

“I had to replace immediate clothing, hygiene articles, food and utensils and many other things until I had access to undamaged items after reconstruction,” she says. “Even though I knew I would be getting an insurance settlement, I still had extra expenses that were beyond my budget.”

At first, she was hesitant to contact the Hope Fund. Like many HCA employees, she thought it was only there to support people with catastrophic losses after a natural disaster, or expenses resulting from serious accident or illness. She quickly learned that the Hope Fund is there for all employees, and that every application is reviewed on its own merits.

“There are people who need assistance more than me, I am sure,” Denise says. “But I also was struggling, and the Hope Fund gave me help when I really needed it. A lot of little things, like photos, can never be replaced, but the generous assistance I received helps to defray not only the physical cost, but the emotion loss from the fire, including displacement and loss of access to personal belongings.”

She plans to increase her Hope Fund donations, and not just from a sense of gratitude.  “People want to help when they know someone is hurting,” Denise says. “But sometimes they don’t know how, or where, or when, to give. With something like the Hope Fund, people know they are helping, and they are helping people in their own hospital and town, as well as the whole company. It’s great that we have this.”