In for the long haul – Jennifer Schade’s Story

When Joshua Schade took a job closer to home, it was good news to wife Jennifer and their five sons. He’d be on the road less, and even though the freight he was hauling was dangerous, he wasn’t too worried. 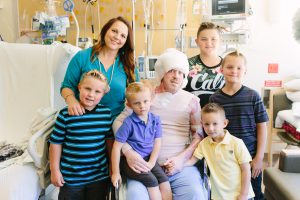 “He hauled sulphuric acid, which is pretty nasty stuff, but he wore full protective gear when he had to unload it with a pressurized hose,” says Jennifer, a Medical Office Specialist at Northern Utah Cardiovascular. “But there was an explosion, and the acid melted right through the clothing.  He was covered head to toe.”

Joshua suffered third-degree burns over 70 percent of his body, and has been hospitalized since March 3, the day of the accident. His condition was touch and go for several weeks, including six weeks in a coma. He has undergone 14 surgeries to date, as skin grafts and other procedures are performed, literally inch by inch, to re-cover his body.

“The process is really long, because he’d do well with physical therapy in between the surgeries, and then another operation would slow him down again,” Jennifer says. “He’s now tube free, and making great progress. The doctors are thinking that soon he can go to rehab, so that he can continue to re-learn how to walk, and feed himself. He has to really start over with everything. It’s been a long road, but he’s a fighter.”

The Schades had just built a new home in August 2014, and so they had few savings to fall back on when Joshua’s accident happened. Jennifer was able to take time off through the Family Medical Leave Act, but the bills quickly began to pile up. She wasn’t familiar with the Hope Fund, but when she heard about it she was eager to learn more.

“With neither of us working, what money we had set aside went really fast,” she says. “I spoke with someone in our office who told me about the Hope Fund. I was still in shock, because it was soon after the accident and I didn’t know if he was going to live or die, and I was trying to keep things together for our five boys. I had trouble getting on the website from the hospital, but I eventually just called the number.”

That call made a world of difference, Jennifer says.

“The person I spoke with was so kind,” she recalls. “Someone from out here had been in touch with them and said I would be calling, so she was ready to answer my questions. It really was something: I was only calling to see if I would qualify, and here I’ve got this nice woman telling me that people there had been praying for me.”

“When I saw that deposit, I just broke down,” Jennifer says. “Right before his accident, Joshua had been saying that we needed to get our savings built back up. Without this help, we would have lost our house. Things are still scary, but I’ve been able to focus on caring for my boys and my husband. The Hope Fund has been an absolute blessing to our family.”